Growing cilantro indoors is almost as easy as growing it outdoors and, by following our ultimate guide, your cilantro plant will thrive!

Many people love the fresh and zesty taste of cilantro, a versatile ingredient that can be used in salads, soups, salsas, dressings, pasta and sauces.

What is a Cilantro Plant?

A cilantro plant is a leafy, green herb that is widely used in Indian, Mexican, Chinese, Thai, Eastern European and African cooking. It’s one of the world’s oldest herbs and seeds from the cilantro plant were even found in Egyptian tombs!

No one knows where it first appeared, but it grows over a wide region stretching through Eastern Europe into North Africa and Southwestern Asia.

It grows to about 20 inches tall, has soft, green leaves and comes from the herb family Apiaceae. While many people love the tart, lemony taste of these leaves, a small part of the population taste dish soap when they eat it!

This is due to a gene that detects aldehydes, which are often used in soaps and detergent.

They are the same plant! Cilantro is the Spanish word for the coriander plant, which derives from the Latin classification of the herb as Coriandrum sativum.

In the USA, we tend to use the name cilantro for the herb’s leaves because of its connection with Mexican food and only call the seeds coriander, while in the United Kingdom and other countries, coriander is used for both.

The coriander plant can also be called Chinese parsley.

Both the leaves and the seeds of cilantro can be used in cooking. Cilantro leaves are rich in Vitamin A, Vitamin C and Vitamin K, and provide a good amount of dietary fiber, selenium, calcium and other trace minerals our bodies need to function.

Some studies show that cilantro also helps to reduce the risk of heart disease, seizure severity, diabetes, and obesity.

Can you grow cilantro inside? Yes! It’s easy to start growing cilantro indoors! Here’s how:

This plant does not transplant well, so it’s best to start with seeds. You can also use a cilantro starter pot which comes with a great kit.

A 4 or 5-inch pot with good drainage holes will be perfect. Many people recommend that you use an unglazed or terra cotta pot, as these help release excess moisture from the soil. 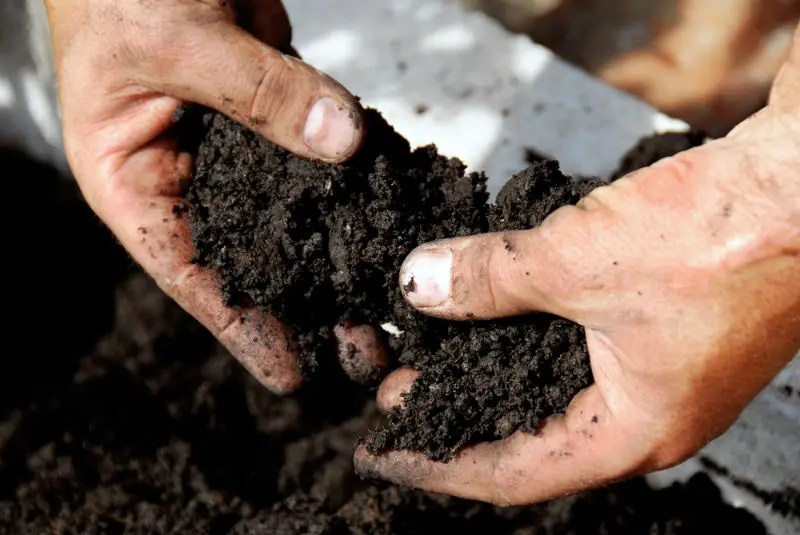 Fill the pot up to cover your seeds with ¼ inch of good quality, well-draining potting mix with vermiculite or perlite from your local garden center.

If you are worried that your soil is too heavy and clay-like, you can mix in sand, bark, vermiculite or perlite to help the water drain.

Put a few seeds in the pot and cover with the last inch of soil. Don’t press the soil down.

The cilantro plant loves sunshine, needing about 6 hours a day, and is happy in direct sunlight. When your seeds are growing, however, it is best to keep the pot somewhere with indirect sunlight with a temperature of around 55-68 degrees.

Don’t let the plant get too hot, as this will cause it to flower and die, known as bolting. If you live in zones 3-11, you can move your pot outdoors as the weather warms up.

If you want to keep it indoors at all times, then you can supplement the sunshine it gets by using a 45-watt grow lightbulb.

Cilantro plants like moist soil but it has to be well-drained – never let this plant sit in water. The best way to water is to water it thoroughly once the soil is dry to the touch. Underwatering is better than overwatering this plant.

Check out Best watering can reviews.

To thrive indoors, these plants need a good fertilizer. About 3-4 weeks after your cilantro seeds have sprouted, you can start feeding it with a 20-20-20 liquid or granular fertilizer or a liquid fish emulsion fertilizer every two weeks.

Cilantro plants are not very long-lasting, so it’s a good idea to have a few at different stages so that you always have fresh cilantro on hand when you need it.

How To Grow a Cilantro Plant Outdoors

Growing cilantro plants outdoors is easier than growing them indoors, but is only recommended if you don’t have a very cold climate.

These plants can handle a light frost, but if you get snow or deep frosts, they are better off growing cilantro indoors.

Again, it is easier to start with seeds rather than a transplanted plant. Here’s how:

Choose a sunny spot in your garden with well-drained soil. It shouldn’t be the hottest part of your garden, but somewhere that gets sunlight and is usually about 75 degrees.

You don’t want it to get too hot, as this will trigger the plant to flower and die (known as bolting). You may want to dig in some bark chips or compost if your soil has a lot of clay in it. Alternatively, you can create a raised bed and fill it with well-draining soil.

Clear the soil and create a level surface, putting some soil aside in a bucket. Scatter your seeds evenly over the space and cover them with about ½ inch of soil.

When they start sprouting and reach 2 inches tall, you can thin out your plants gently, positioning them 3-4 inches apart. Water well after transplanting.

Keep the soil moist but not waterlogged. Until the cilantro seeds sprout and the plants become established, you should lightly water them each day to ensure they don’t dry out at this delicate stage. Once established, they enjoy a thorough watering once a week.

Cilantro plants need less nutrition when they grow outdoors, but will benefit from a feed of 20-20-20 liquid or granular fertilizer once a month.

This plant has a very short lifespan even if it is growing in perfect conditions, so be sure to prune it frequently, use the leaves and plant new seeds every 6 weeks or so to ensure you always have a fresh supply on hand.

Once the herbs go to seed, you can either use the seeds in your cooking or plant new herbs.

If you want your cilantro to grow well and produce a lot of leaves, you have to harvest it carefully. Select leaves for harvesting rather than cutting away clumps, and cut them without damaging other stalks.

Indoor cilantro plants can get spindly and thin if they are reaching for the light, so pinch back the growing tips of the plant to force it to become bushier.

Will Cilantro Grow Back After Cutting?

Harvesting is usually very good for herbs and encourages new growth. Unlike other herbs, however, cilantro is not very long-lasting, so you have to be selective about how you harvest when you’re growing cilantro indoors.

Pick leaves for use rather than cutting it back severely. It will grow back after cutting, but usually doesn’t grow back as strongly, which is why we recommend having multiple plants.

How To Dry Cilantro Seeds

To use your cilantro seeds in cooking, first dry them in the oven. You can do this by spreading the seeds on a tray and putting them in your oven on the lowest setting for about 5-10 minutes.

Once dry, store them in a paper bag rather than a plastic one until you are ready to use them.

If you want to keep them for a long time, wait until the seeds turn brown in the paper bag and then store them in a glass or ceramic, airtight jar.

When you want to use them, crush the seeds into a powder using a pestle and mortar or use them whole. These seeds taste wonderful in curries, soups and meat dishes, as well as in deserts and cakes!

Cilantro leaves are best used fresh off the plant rather than frozen or dried, as they lose their flavor quickly.

Cilantro plants are good for companion planting, helping tomatoes and spinach grow well. It attracts beneficial insects that eat the pests that attack these plants, so it’s a great method of organically preventing pests in your yard or vegetable garden.

How to Grow Cilantro Outdoors in the Winter

Cilantro is a bit frost-tolerant and you can grow it throughout zones 3-11 in winter. If you live in a frosty area, it’s a good idea to plant it in outdoor containers that you can protect through the winter using a cover at night and ensuring it gets lots of morning and afternoon sunlight.

Video Of How to Grow Cilantro Indoors All Year Round Below

Is it Better to Grow Cilantro Indoors or Outdoors?

It is easier to grow cilantro outdoors as it needs a good 6 hours of sunlight per day. However, if you live in an apartment or a colder zone below Zone 3, then it’s better to grow it indoors.

This takes a bit more effort but with a weekly watering and a dose of 20-20-20 each month, it will grow well.

Can You Eat Bolted Cilantro?

When the cilantro gets too hot, the survival mechanism for the plant forces it to flower. This is known as bolting. Bolted cilantro is edible, but has a bitter, unpleasant taste, so we don’t recommend eating it.

To make your plant last longer, pinch off the flowers as they appear and keep it out of direct sunlight through the hottest part of the day.

Another great thing about growing cilantro is that these plants are pretty disease and pest resistant! You’re unlikely to have any problems from common pests like thrips, aphids or whiteflies.

If you do see these pests, try not to use a broad-spectrum pesticide because these are edible plants. Instead, try get rid of them using a mix of dish soap and water sprayed onto the plant.

This can be treated with a broad-spectrum fungicide from your garden center. Don’t eat any leaves off affected plants while infected or while being treated, and wait for new growth. Always clean the leaves thoroughly before using them in food.

You can prevent these issues by giving your cilantro plant enough sunlight, not too much water, and planting it in well-drained soil.

Now You Know How to Grow Cilantro Indoors and Outdoors!

As you can see, growing cilantro is easy!

By meeting the plant’s key needs for 6 hours of sunshine per day (but not too much heat or it will bolt).

A regular dose of 20-20-20 or fish emulsion fertilizer, and ensuring it is in well-drained soil where it gets a thorough weekly watering, your cilantro plant will thrive.

By following our guide, you’ll have everything needed for successfully growing cilantro indoors and outdoors!

Fishbone Cactus | How to Grow and Care Guide

Previous Post Why are My Orchid Leaves Turning Yellow? Tips for Dealing with a Common Orchid Problem Next Post Top 5 Best Small Indoor Plants For Students