Garden Shed Wallpaper Tips and Ideas
5 Best Herbs that Help You Sleep
8 Indoor Plants with Big Leaves for Your Home
Best Dog Fence Ideas for Your Garden
7 Tips for Successful Garden Construction Projects
9 Best Gardening Books for Beginners in 2022
How to Kill Bermuda Grass Without Damaging Your Lawn
Best Types of Landscaping Rocks for Your Garden
20 Best Hedging Plants for US Gardens
Potting Shed: Should You Build Or Buy?

How To Keep Japanese Beetles Away From Your Trees And Shrubs

Japanese beetles are one of the most destructive garden pests homeowners and gardeners face. These little creatures will devour on just about everything they come across on their path, including your well-nurtured trees and shrubs. It can be surprising how such small pests can cause so much damage to your trees and shrubs. If left unchecked, Japanese beetles can leave trees in total defoliation.

How Can You Identify Japanese Beetles In Your Garden Or Yard?

Thankfully, the destruction to trees and shrubs caused by Japanese beetles is pretty easy to identify, with the biggest indicator being the many small holes they will chew on the leaves of trees and shrubs. Because of the sheer number of Japanese beetles that will usually swarm to plants, they can destroy plants in a matter of days, so quick identification and treatment is paramount.

Originally from Japan, as the name suggests, Japanese beetles are just under ½ inch long with metallic-green bodies. Around the edge of their bodies, they will have white dots that span around the circumference of the abdomen.

Japanese beetles typically travel in large numbers, so if you see one Japanese beetle, you’ll most likely find more. Despite the beauty of these shiny insects, they can be menacing to your yard and garden.

The damage caused by this little pest can be quite frustrating to any garden owner.  Below are a few tips that can help you get rid of or prevent Japanese beetles from harming your trees in shrubs. Hopefully, you will find a method that suits you. Trying multiple treatment methods at a time can only increase your effectiveness in the battle against these small, flying insects.

Methods Of Keeping Japanese Beetles Away From Your Trees And Shrubs

Treat the affected plants with pesticide

Spraying your trees and shrubs when you notice the early signs of attack is one of the most effective ways to keep them away. Start by spraying with any neem or pyrethrin-based insecticide once you identify the first beetles.

Neem based insecticides work as an anti-feedant, thus reducing the feeding on your plants.

Pyrethrin insecticides, on the other hand, are very effective and are a safe method to use for trees that bear fruit or have edible leaves. Also, make sure to use these two methods interchangeably and more often since the beetles are known to be quite persistent even when sprayed. They will put up a good fight if they are not sprayed at regular intervals.

To avoid wasting time and money with your treatments, always spray the two types of insecticides regularly and interchangeably to keep the Japanese beetles in control.

Japanese beetles are quite slow and you can remove them by hand when their numbers are low. Early morning hours are the best times to hand pick these beetles since at this time, they are less alert than at any other time during the day.

To prevent them from coming back after hand picking them from your trees and shrubs, toss them in a bucket full of soapy water. Normally, a Japanese beetle won’t survive soapy water.

Physically removing the Japanese beetles can be effective as long as you are able to get most, if not all of the insects off of your plants by hand. The issue with physically removing the beetles lies with the inability to reach tall trees or extremely dense bushes. In the case of inaccessible areas in your yard, other removal or treatment methods will be more effective. 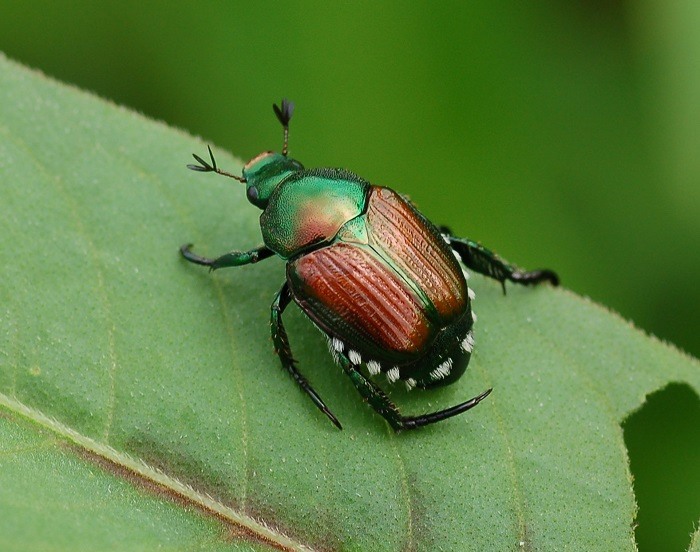 Here are some plants that don’t attract Japanese beetles or that they will avoid altogether:

With interplanting, Japanese beetles will often find it difficult to get to their desired plant. It will also help to keep them moving along to another garden away from your yard to find food.

Another tip you can use when planting is avoiding planting a large number of plants on a small piece of land. Make sure you have a considerable amount of spacing in between each plan..

Using a Japanese beetle trap is a great option for large yards and areas where the above mentioned methods might not be working as well as you’d like. Traps are known to work well for orchards and where a garden owner has to control larger areas.

One big advantage of using these traps is that they do not contain harsh chemicals capable of harming other plants, insects or animals.

In gardens, especially with edible plants, many homeowners will want to avoid spraying insecticides. In that scenario, a Japanese beetle trap can be a great option to protect the trees and shrubs in your yard and garden.

Wrapping Up How To Keep Japanese Beetles Away from Your Garden

In the end, trying to get rid of Japanese beetles can be very frustrating, especially when they can come in and ruin your hard work in a very short period of time. There are plenty of options available to homeowners for preventing and removing infestations of Japanese beetles, each having their own pros and cons.

If one method doesn’t seem to be working for you, try another method or even multiple methods at once. Truly, you can’t be too aggressive when it comes to removing Japanese beetles. If left to their own devices, Japanese beetles will wreak havoc to your beautiful landscaping.

Ashwagandha – How to Grow and Care Guide

5 Best Herbs that Help You Sleep

Previous Post How to Maintain a Healthy Lawn All Year Round Next Post How To Build A DIY Hydroponic Grow Box?