Dethatching Vs Aerating – Tips for a Better Lawn

Are you worried about the health of your lawn? Is the grass in your yard filled up with dead organic material and looks pale? Do you want a healthier and greener lawn? Dethatching and Aerating are the two best ways to combat the bad things lying in your grass.

People often get confused between dethatching vs. aerating. These two techniques address two entirely different issues. They are not interchangeable yet being the perfect solution for greener lawn. Let's dig into the topic and find out the best way.

Dethatching is sometimes called as thatching. Thatch, the waste organic matter, compacts the soil and forms a dead layer that prevents the roots from getting watered. Thatch stops the water from going deeper into the roots. Basically, it is the thatch removing process that is stuck between the grass base and native soil. The thicker the thatch is, the amount of oxygen, water, and other nutrient intakes get lesser.

How And When To Dethatch Your Lawn?

Some available tools in the market makes it easier to thatch your lawn. The most commonly used tool is dethatching rake. It is a multipurpose garden rake with a head and two differently designed rows of tines. For thatching purposes, you can use the ones with straight-edged tines.

If the lawn is smaller in size, then rakes are very useful. However, you have to use electric dethatchers with larger area. The electronic dethatching machines can cost a little bit more than the manual rakes.

While being dethatched, the soil must be moist. The best season to dethatch is in cooler weather. Before dethatching the lawn, you must mow it to half of its original length. But keep in mind: don't dethatch the lawn during drought or hot temperatures. Dethatching the lawn once every year keeps it healthier and greener.

Aerating is the process of perforating small holes in the soil to allow water and the nutrients to go deeper and reach the roots. It helps roots to intake water and grow stronger. The idea of aerating is to alleviate the soil compaction.

How and When To Aerate the Yard

There are two types of aerators present for this process. One is a spike aerator, and the other is a plug aerator. The spike aerator only pokes holes into the lawn with its solid tine. This type of aerator goes 2-3 inches deep and 0.5-0.75 inches in diameter.

The plug aerators remove the core grass area and soil from the lawn. It can also dig larger holes than the spike aerators. They are a bit expensive.

The best time for aeration is undoubtedly the growing season in which the grass can heal and fill in the open areas. Cooler weathers and spring seasons are ideal for aerating. The lawn should be moist. Instead of a single pass, make multiple passes over the compacted areas. Proper fertilizing, mowing and watering are the must-do things after aerating.

How dethatching differs from aerating?

Should I Dethatch Or Aerate My Lawn?

In short, aerating and dethatching are the two suitable techniques to keep your lawns healthy. However, thatching includes a lot of work involving raking and remove all the thatch. On the brighter side, aerating is a straightforward task and needs less effort.

Thatching damages the lawn for its betterment, and the land cures itself after the process. If you have any queries regarding dethatching vs. aerating, feel free to drop a comment in the section below. 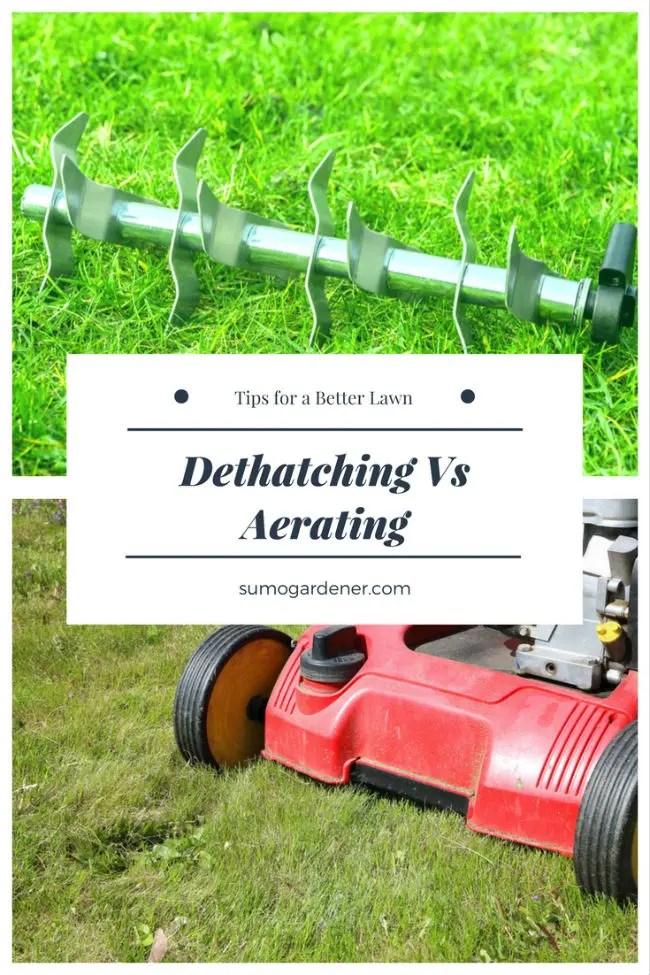 How to Kill Bermuda Grass Without Damaging Your Lawn

20 Best Hedging Plants for US Gardens

Previous Post What is the Difference Between Echo vs Husqvarna Chainsaw Next Post Now Trim Your Land as Per Your Convenience: Straight Vs. Curved Trimmers