Can You Mow Wet Grass? Is It Good for Your Grass
How to Get Rid of Scale Insects
New Sod Care Guide – When to Mow, Water and Fertilize
5 Best Sweepers and Rakes for Pine Needles
When To Apply Weed And Feed: The Best Time And How To Apply
Organic Lawn Care Tips | How to Do it Effectively
5 Best Organic Fertilizers | 2022 Product Reviews and Buying Guide
Ortho Ground Clear Vs Roundup 2022 | Who Will Win
5 Best Oscillating Sprinkler To Get In 2022 Reviewed
8 Best Lawn Aerators for 2022 and How To Aerate Lawn

11 Best Ways To Get Rid Of Weeds Naturally

We all know that weeds can be bad for your plants. For one, they can absorb the water and soil nutrients that your plants need. Second, they can overtake the space in your lawn while inviting pests and plant diseases.

Thus, it’s important that you learn how to get rid of weeds naturally.

Possibly the oldest and the most traditional method of weed removal is to pull them out with your own hands. This will take your time and effort, but it won’t cost you a thing.

Also, this method is best for small weeds that have just appeared on your lawn. You can accelerate the process by using various tools such as a Japanese soil knife and a diamond hoe.

The soil knife has the same purpose as a dandelion weeder as they are both great for removing the roots from the soil. After all, the weeds could grow if the roots remain in the soil.

On the other hand, the diamond hoe is for cutting off the weeds from their respective roots. 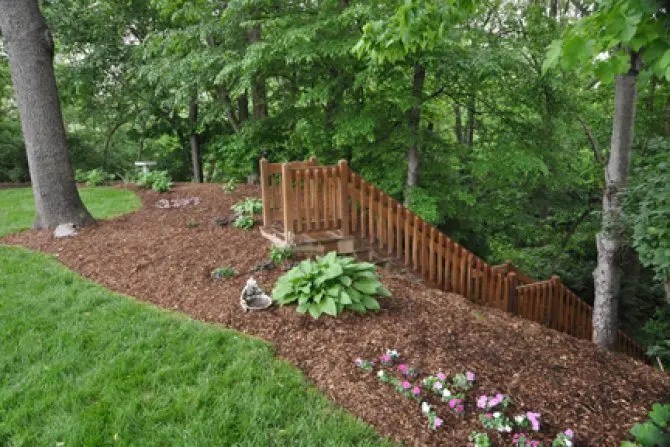 One good way to get rid of weeds is to cover them so much that they become smothered. Apart from serving as a natural source of fertilizer and moisture, mulch can help remove weeds.

First, you must collect biodegradable or organic materials such as pine bark and grass clippings. However, mulch made up of wooden materials must be used with caution.

Due to their material, the mulch has to get nitrogen from the soil. Therefore, the mulch can absorb the nitrogen in your plants. Thus, it would be best to use wood mulc﻿h in areas that are far from tree trunks and plant stalks.

Regardless of the products you use, the mulch layer should at least from two to four inches deep.

Other materials you could use for mulch include newspaper and cardboard. A thick section of a newspaper will effectively deprive weeds of sunlight and oxygen.

Not only will the weeds die, but they won’t be replaced due to how thick the newspaper material is. In particular, one layer should have at least ten newspaper sheets.

Make sure to apply some water before you add a maximum of two inches of mulch. If weeds also appear in the mulch, just simply add more layers of mulch and newspapers. In the end, decomposition will take over and nourish the soil.

This byproduct of milling isn’t a way to remove already existing weed, but it’s a good method for preventing new ones from appearing. Thus, you can treat it as a pre-emergent weed solution.

Corn gluten comes in the form of pellets, powder, or granules. Remember not to apply too much of it though, as too much corn gluten could damage shallow root systems. 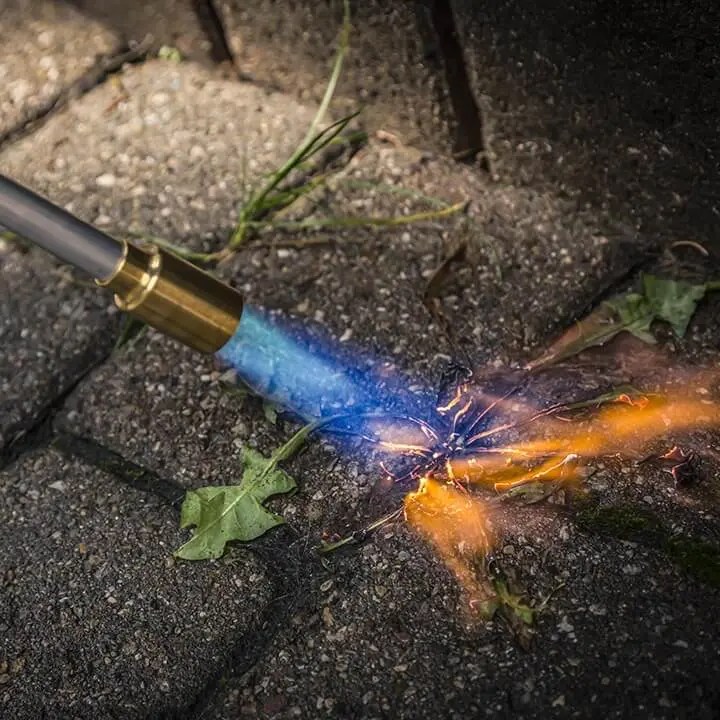 There are several ways to conduct heat application on weeds. One such method is to utilize the summer heat. During this season, you can get sheets of transparent and thin plastic. Cover the areas in your lawn where weeds reside with the plastic.

Leave the sheets there for at least a month and for as long as six months. Eventually, too much heat will kill both the weed and the weed seeds. Still, you must be careful since the same heat can kill off beneficial organisms.

Another option is to use fire. This method can be done at any time of the year, but it does need to be done with extreme caution. We recommend using fire only when the winds are calm enough.

Otherwise, your plants could accidentally succumb to the flames too. Worse, the fire could reach dry grass and spread fast in your property.

One misconception is that the weeds need to be in direct contact with the flame. In truth, you can just place the fire near them. The intense heat is more than enough to remove the moisture of weeds.

In just a couple of days, you can expect to see dried-up dead weeds in your lawn. Still, you can just burn them in an instant if that’s your preference. The third option is to use boiling water.

If you like preparing tea or coffee, you can use the remaining water in your kettle. Just apply the boiling water on the pesky weeds to burn the moisture and weed cells quickly.

In particular, using boiling water is great against weeds located in walkways and driveways since it will cool down before it slides to the nearby plants on your lawn.

The acetic acid in vinegar is a harmful desiccant to weeds and your plants. While it doesn’t work well against weeds like pennywort and thistle due to their waxy texture, vinegar will easily kill plants that have yet to establish their roots in the soil.

You would not want to accidentally pour a load of vinegar on your plants, so it’s best to use a spray bottle. If the weeds are near your plants, you can get any container such as a box or a plastic bottle with the bottom layer removed.

Put the container over the weeds before you spray on them to prevent the vinegar from hitting your plants.

Get an Organic Herbicide 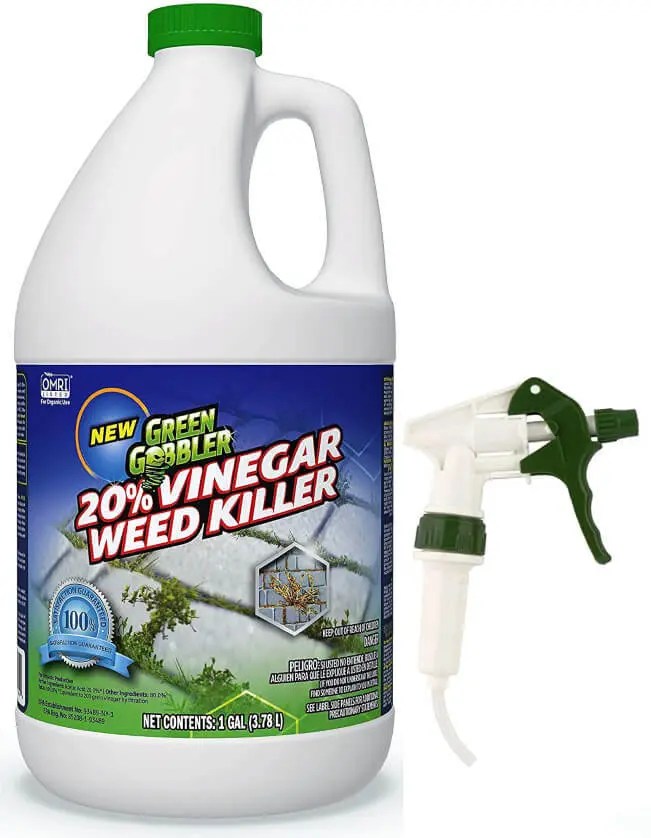 Organic herbicides are typically available in your local garden supply stores. However, it would be best to read the label of the herbicide you want to buy.

This will help you know its ingredients such as citrus and fatty acids. Also, reading the label will let you know how it can be applied and whether it’s the right herbicide for the weeds in your lawn or not.

Sunflower oil or canola oil is specifically used for cooking. What you might not realize is that vegetable oil also works as a natural herbicide. In fact, it also works well against detrimental insects on your lawn.

Also, concerning environmental problem, you don’t have to worry at all since vegetable oils are biodegradable. Similarly, essential oils such as those made of cinnamon and red thyme can effectively remove weeds too. Once you coat the weeds with these essentials oils, they will be smothered.

This is an option that you should only consider if you are okay with having no plant to grow in a given area again. Salt will easily kill off weed, but it will also damage both the soil and the concrete in your driveways and walkways.

It’s best to just get a sprinkling of salt that you can place along the cracks and corners of your pathways where weeds typically reside.

Here is a video of using salt:

In conclusion, there are many ways to remove weeds without resorting to harmful chemicals. From manually pulling them out to using the excess boiling water in your kettle, you don’t always have to spend money to take care of your lawn.

We hope that this guide helped you in any weed management problems you might have. If you have any questions, do give us a comment. 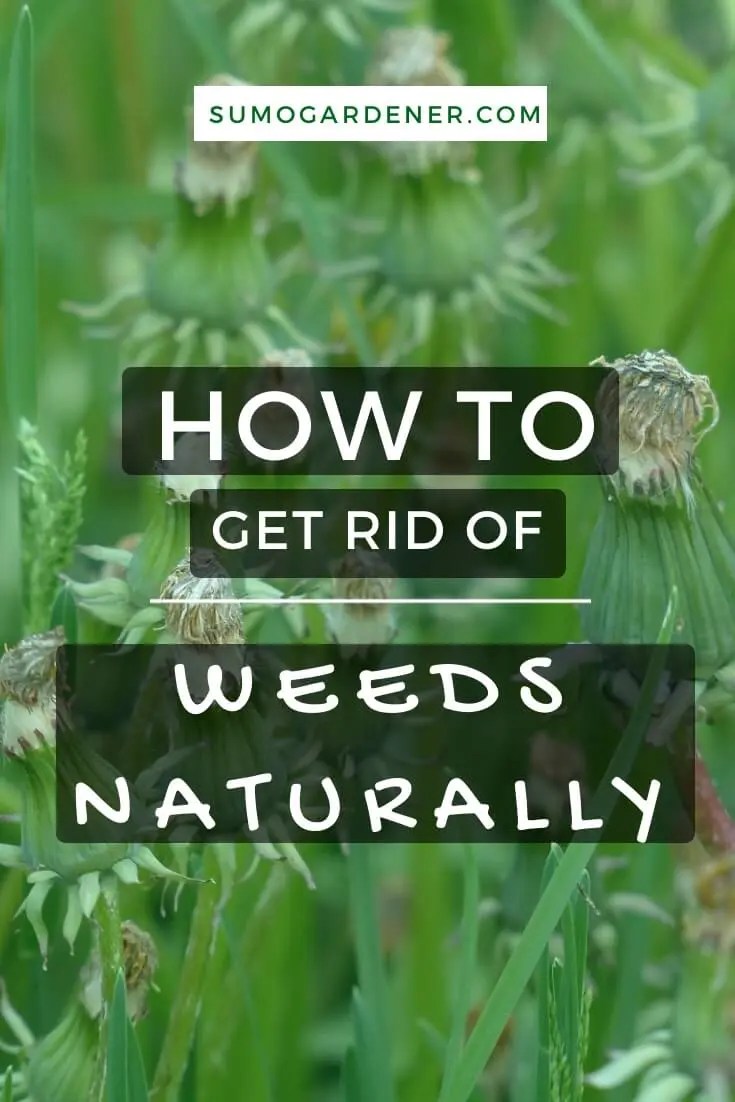 Can You Mow Wet Grass? Is It Good for Your Grass

New Sod Care Guide – When to Mow, Water and Fertilize

When To Apply Weed And Feed: The Best Time And How To Apply

Natural control is always the best option even when it is about removing weeds as it will retain the fertility of the soil. If you are looking for the best options to remove the weeds in your garden through natural means then this blog from Sumo Gardener is just for you.