Can You Mow Wet Grass? Is It Good for Your Grass
How to Get Rid of Scale Insects
New Sod Care Guide – When to Mow, Water and Fertilize
5 Best Sweepers and Rakes for Pine Needles (2023 Reviews)
When To Apply Weed And Feed: The Best Time And How To Apply
Organic Lawn Care Tips | How to Do it Effectively
Ortho Ground Clear Vs Roundup 2023 | Who Will Win
5 Best Oscillating Sprinkler To Get In 2023 Reviewed
8 Best Lawn Aerators for 2023 and How To Aerate Lawn
How To Level a Bumpy Lawn – Causes and Fixes

Weeds are a common problem among gardeners and lawn owners. However, some weeds are worse than others. When these bad weeds appear on your property, you need to know how to remove them immediately.

Here, we’ve made an informative guide on top 10 of the most harmful weeds and how to kill them.

This weed is characterized by its square stems and the aroma it releases after you mow them. Ground ivy thrives in areas filled with shade and moisture.

This weed creeps along the ground surface and spreads quickly. Worse, this is a perennial weed that can establish its roots at the nodes. Thus, it is difficult to remove them by hand.

However, you might still kill ground ivy through digging and hand pulling if the soil is moist enough. If you want to use chemicals, you should pick a selective and post-emergent herbicide that has potent ingredients including triclopyr and dicamba.

Found in both southern and northern regions of the United States, sedge weeds are incredibly invasive and difficult to remove. One notable characteristic is how they spread in irregular patches.

In addition, sedge weeds have grass blades that are both rough and stiff. Worse, using pre-emergence herbicide won’t be effective against them.

On the other hand, there are more than 12 known varieties of sedge weeds. You first need to identify which one exists in your lawn to help you find the right herbicide.

You can apply this herbicide either through spot application or through broadcast spraying if there are too many of them. Also, you can, regularly mow the affected areas to cut off the seed heads.

Bindweed is characterized by its flowers shaped like trumpets. They grow around the stems of other plants, which eventually smothers them to stop optimal growth.

In addition, their roots make them difficult to remove. Apart from being perennial, the white roots usually regenerate if they are broken. To kill bindweeds, you can dig them out of your garden.

With this method, you must remove all of the roots since they can regrow if you just break them. If you want a chemical solution, you can use glyphosate. However, do note that this is a non-selective herbicide so you must be careful where you use it.

The perennial Japanese Knotweed develops with canes that resemble bamboo. Unluckily, this spreads aggressively in the damaged soil, but its death is the most upsetting concern for many homeowners.

Once the Japanese Knotweed perishes, its canes remain for several years. In Europe, the appearance of these unsightly canes has lowered the value of properties.

In order to remove Japanese Knotweed, you should apply a glyphosate herbicide. You can use this either using a garden sprayer or by injecting it inside the canes.

In addition, this chemical treatment is most effective during the flowering period of the Japanese Knotweed, which is from late summer to early fall. Otherwise, you can cut and dig out the rhizomes of this weed.

Here is a video about removing the Japanese Knotweed:

This weed is the bane of many corn growers due to how it can quickly reduce corn yield. The crabgrass can become the host to various plant diseases such as leaf blast and mosaic virus.

During the summer season, you can find new crabgrass growing while also creating seed heads. In addition, you cannot just mow crabgrass to remove them.

To kill crabgrass, you can use chemical killers or organic variants that use plant oils and vinegar. However, these weed killers are usually non-selective, which means that other plants on your property could perish if you do not aim properly.

Otherwise, you can simply use boiling water if you are only dealing with a small patch of crabgrass.

This invasive weed is difficult to remove due to its deep root system. The spread of Bermuda grass can affect the growth of various plants such as strawberries and squash.

Worse, this weed could also damage flower beds. Thankfully, you can remove this without even having to use chemical products.

You can kill this weed through heat application. During summer, you should water the Bermuda grass. Afterward, you must get a transparent sheet of plastic tarp to cover the weeds.

To keep the tarp in place, you can place rocks or any heavy object on the corners. After a month, the Bermuda grass would have likely died due to too much heat.

This cool-season perennial weed has been observed to affect crop yields. At worse, they can decrease the yield by as much as 95 percent. Thus, ignoring the spread of quack grass can result in financial losses.

To kill quack grass, you can plow or mow them as many times as necessary. Of course, you can use glyphosate herbicide to get rid of the quack grass.

We recommend that you deeply irrigate the affected area before and after you apply the herbicide. Ideally, you should consider mechanical methods along with herbicide treatment to ensure the removal of quack grass.

This perennial weed is known to quickly spread not just in farms and pastures but also on roadsides and abandoned areas. Once the Canada thistle infests an area, the cattle won’t consume grass in that area.

Thus, a fully infested pasture will lead to starving livestock. Within a year, a single Canada thistle could invade an area measuring six feet in diameter.

You can mow the meadows to kill Canada thistle. However, you have to do this every two months for several seasons. Also, you need to do this while applying herbicide.

Also read: How to Kill Thistle In Your Garden

One of the most difficult weeds to completely remove is burdock. Once a burdock seed head breaks open, thousands of burdock seeds get scattered in many directions and distances.

Also, burdock weeds can cling to people and animals to spread in other areas. Animals, plants, and humans can suffer from burdock weeds. Cattle could develop mouth sores, skin complications, and eye infections.

Consequently, your plants can succumb to root rot and other diseases that burdock weeds carry. Moreover, some people suffer from allergic reactions due to the bristles.

When the burdock weeds are still small and young, you can pull or dig them out by hand. Once they have grown, however, you have to be careful. If you want to mow the tall burdock weeds, you must ensure that they haven’t bloomed yet.

Otherwise, mowing will help spread the burdock seeds. Of course, you can use glyphosate to remove them.

This annual weed can quickly spread during the summer season due to the hot temperature. The leaves can be hairy and purple or red in color.

Likewise, spurge weeds have reddish stems and they form circular patterns. One of the reasons why this weed is harmful is its sap.

While the sap can be consumed by goats and sheep without any worries, it is poisonous to cows and other animals – irritating both their mouths and digestive tracts.

Moreover, humans also must not come in contact with the sap of spurge weeds. Otherwise, they could develop blisters or rashes.

In order to kill spurges, you can use herbicide. Similarly, you should apply pre-emergence herbicide during the spring and fall seasons to stop spurges from successfully germinating.

If you do not want to use herbicides, you could simply pull out them out. Just remember to include the roots so they do not grow back. Also, a dense and well-maintained area of healthy plants can limit their spread.

If you have pokeweed problems in your garden, check out our guide on how to get rid of pokeweed safely and remove it for good.

In conclusion, weeds can cause damage in many ways. While some are a nuisance due to their invasive characteristic, others can harbor plant diseases.

Likewise, there are weeds that can harm even animals and humans. Thus, it’s important that you know how to eradicate them. We hope that our guide will help you in keeping your property free of these undesirable weeds. If you have any questions, do give us a comment. 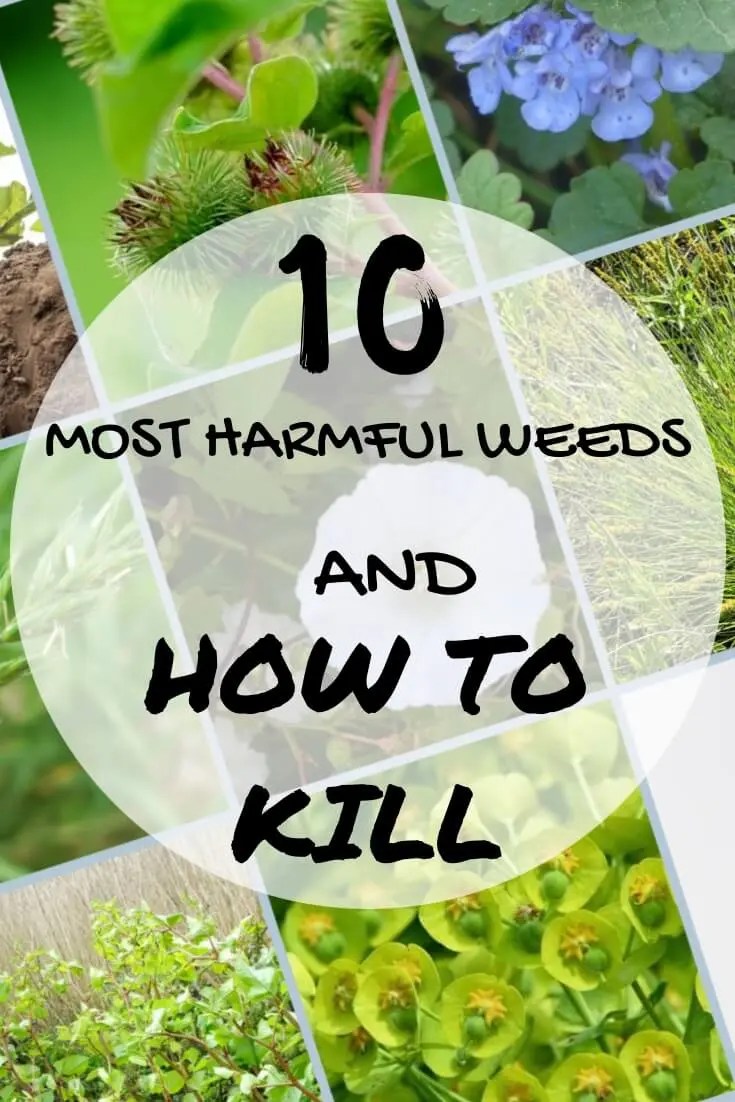 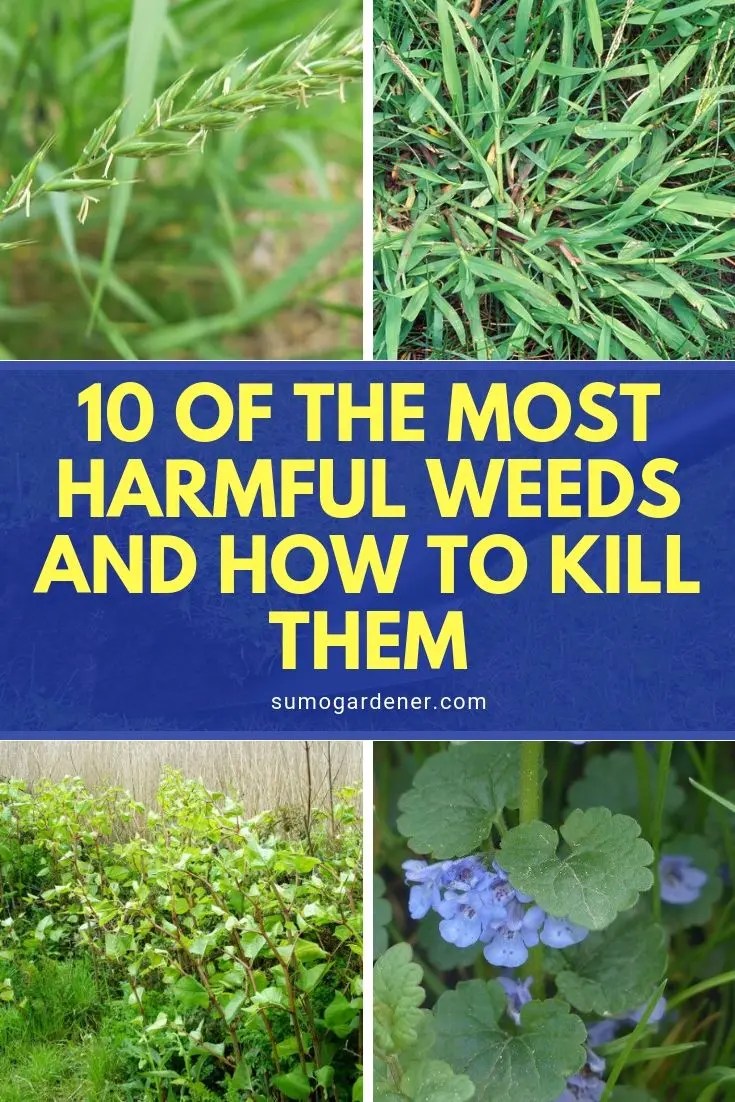 Can You Mow Wet Grass? Is It Good for Your Grass

New Sod Care Guide – When to Mow, Water and Fertilize

When To Apply Weed And Feed: The Best Time And How To Apply

Love how you write Ann