17 Most Popular House Plants
Best Cilantro Companion Plants (And What Plants to Avoid)
How to Grow Basil in a Pot? Here Are 4 Easy Tips For You to Follow!
25 Best Hanging Basket Flowers to Grow in Your Garden
Forsythias | Grow & Care Guide
Calathea White Fusion (Calathea Lietzei) Growing Guide
Monstera Thai Constellation Ultimate Growing Guide
Ashwagandha – How to Grow and Care Guide
5 Best Herbs to Grow for Improving Your Sleep Quality
8 Indoor Plants with Big Leaves for Your Home

Beauty Star is a gorgeous calathea with a bright pointed leaf that has retained its title within the genus Calathea despite many of its more iconic brothers and sisters being reclassified as Goeppertia. This true calathea is really easy to grow, and resilient to a lot of the common problems found in other calathea species.

In this guide, we’re going to look at everything from growing to how to care for calathea beauty stars, but most importantly we’ll explore how and why this is such a resilient calathea. 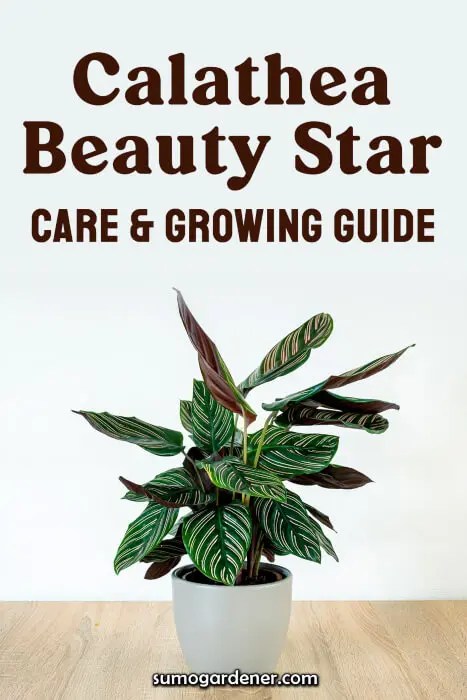 What is Calathea Beauty Star? 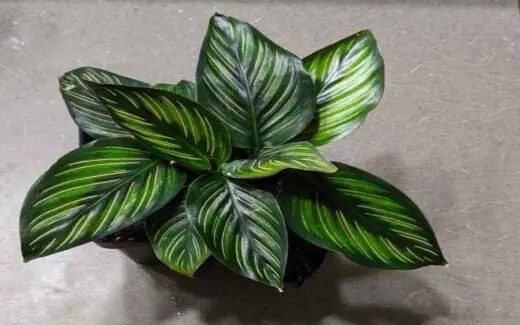 Calathea beauty star is a stunning foliage house plant whose leaves move according to the time of day, proving more than almost any other Calathea, why they were given the name ‘prayer plant’.

In the evening when the light levels drop, nodes at the base of calathea leaves shrink and cause the leaves to curl upwards, creating the iconic praying hands stance.

Calathea beauty star curls up more than any other calathea we have ever cared for (and we’re serious collectors here!). Calathea beauty star doesn’t have stems, as their leaves grow directly from rhizomes rather than fibrous roots, just like an Iris, or a tulip.

While Calathea ornata have beautiful flowers in the wild, they don’t flower in cultivation so the stem that would hold the flower never appears.

Calathea Beauty star, or Calathea ornata ‘Beauty Star’ to give it its proper title, is a foliage houseplant, whose ancestors are native to South America.

Beauty star was bred in cultivation in the mid-20th century but comes from the Calathea ornata family most commonly found growing wild in Colombia and Venezuela.

The tropical Caribbean forests of Colombia and Venezuela provide a perfect habitat for Calathea ornata, whose offspring, including Beauty Star, require high temperatures, high humidity, and partial shade, although they can cope with more direct light than most calatheas.

Calathea beauty stars are best placed in a North facing window, or near a west-facing window for indirect afternoon sun. If they are placed in a south-facing room, they should be kept at least 1m away from any windows to avoid leaf scorch.

Like all calathea, Calathea ornata have edible roots called rhizomes which are filled with starchy carbohydrates, but they have a very subtle taste which is not at all worth harvesting.

What’s interesting about their roots is how effective they are at storing energy in cooler climates, making them ideal house plants that can cope with cool dark winters thanks to their underground energy stores.

How to Grow Calathea Beauty Star 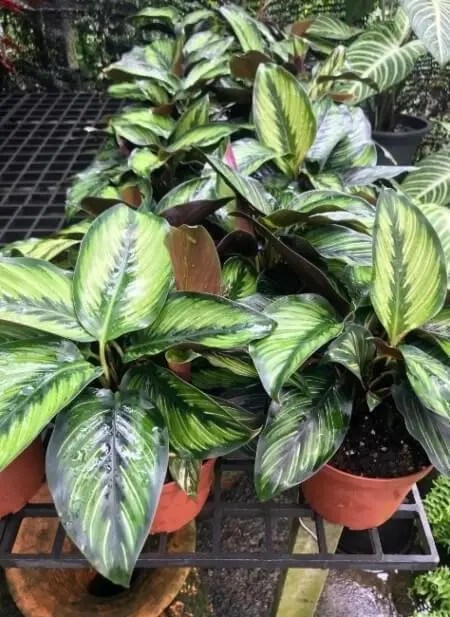 Calathea beauty star is best grown indoors in containers, where you can control the temperature, light, and humidity perfectly, and won’t stress your houseplants out by moving them around each season.

Calathea beauty stars should be grown in containers no more than 2” larger than their root ball to avoid root rot and help them cope with heavier watering than most houseplants.

They will usually forgive you for the wrong pot, and even the wrong compost, but there are some things that even the resilient calathea beauty star won’t forget.

Wherever you live in the country, you should never place a calathea in full sun. Direct UV rays can burn their leaves as they are bred from plants that lived under tree canopies in the Caribbean.

Find a south-facing window in a warm room, but place the Calathea at least 1m away from the window and off to the west side of the window to protect it from the afternoon sun.

We grow ours on the wall opposite a south-facing window, on shelves, so they are never in direct light, but the room remains warm all year round.

While it’s possible to grow calathea beauty star outdoors in America, they are only hardy down to 40°F, so can’t be kept outdoors in late autumn or winter even in the south, and are best brought indoors at the end of summer in Northern climates where temperatures can start to drop in early autumn.

How to Propagate Calathea Beauty Star 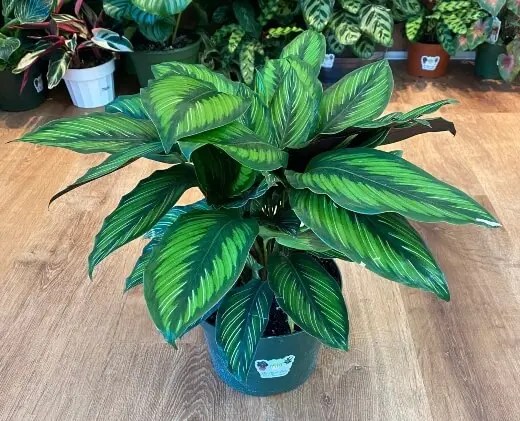 It’s really easy to propagate Calathea ornata from division, but they are tricky to grow from seed, with a very poor success rate compared to other calathea in our experience (that goes for all Calathea ornata, not just Beauty Star).

But if you don’t want to splash out on full-grown plants, and don’t have plants to start with, this guide will give you the best chance of success with calathea beauty star seeds:

The best way to propagate calathea beauty star is by division. Any rhizomatous plant can be propagated by division when it reaches maturity, but Calathea typically have quite a loose root system so are an easy plant to practice with if you have a mature Beauty Star available to divide.

Beauty stars are tougher than most Calathea so bounce back really quickly after repotting and division. To divide your Calathea beauty star, follow the guide below:

How to Care for Calathea Beauty Star 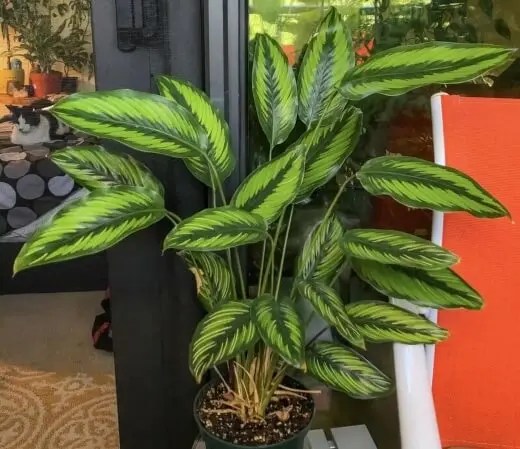 What Fertilizer to Use

Calathea beauty star benefit from a balanced houseplant fertilizer in spring and summer while they are actively growing (NPK 10/10/10 or similar is perfect) but you should stop feeding them completely in fall and winter while they are dormant.

Use a pouring feed every two weeks to keep their nutrient levels top up, but if their leaves begin turning yellow stop watering and consider repotting them into a drier mix, or moving them to a brighter room until the soil starts to dry out and their leaves begin to recover from overfeeding.

Calathea beauty star like any Calathea ornata need less misting than most calatheas, but should still be misted at least once a fortnight so as to avoid their leaves drying out, and to wash off any dust which can host fungal spores.

Water calathea beauty star when the top inch of soil is dry to the touch. Unlike many Calathea they shouldn’t be kept moist all the time as they have denser leaves and can suffer from overwatering showing signs of fungal rot when their leaves develop brown spots and wilt.

Calathea beauty star doesn't need repotting very often. They are fast-growing compared to other houseplants, but take a long time to outgrow their containers.

Keep an eye on where the base of the leaves is compared to the edge of the pot. Each leaf will have its own leading rhizome that supports it off the main root ball.

From there, there are fibrous roots from the rhizomes, but they rarely fill containers until the base of the leaves gets within 1 inch of the pot wall.

When the time comes to repot a calathea, take the opportunity to shake off the soil and give them fresh compost in the new container so they have a nutrient boost while they re-establish in their new home.

Avoid moving them for a few weeks after repotting too. They are best kept in a location they are used to avoid shocking their system. 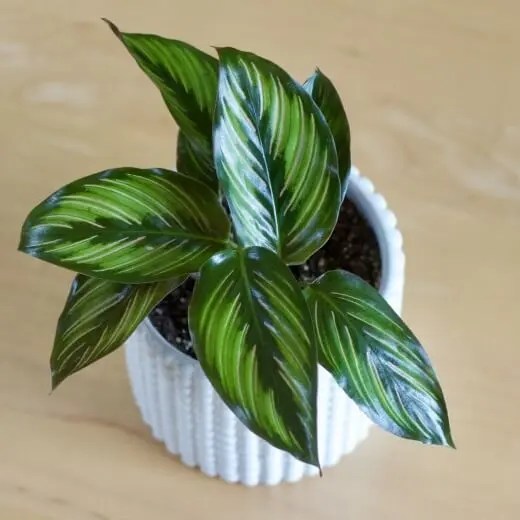 Calathea beauty stars have glossier leaves than a lot of other calathea species, so suffer less from pests like spider mites and mealybug that prefer dry conditions, but are very susceptible to thrips.

In terms of treating any insect infestation on a calathea, the most direct method is always rubbing alcohol which dries out insects and kills them instantly when applied directly using cotton buds.

If you notice browning to the edges of leaves this is usually due to overexposure to direct light, but it can also be a sign of under watering, or root rot, which causes leaves to dry out as no water can reach them.

Before taking any drastic action, try moving your Calathea to a cooler position, where it’s able to recover. If it shows no signs of improvement, check the roots for any signs of rot (blackened roots, or soft, mushy, rhizomes).

Remove any rotten roots and their corresponding leaves and repot the plant, watering in small amounts for the next few weeks. 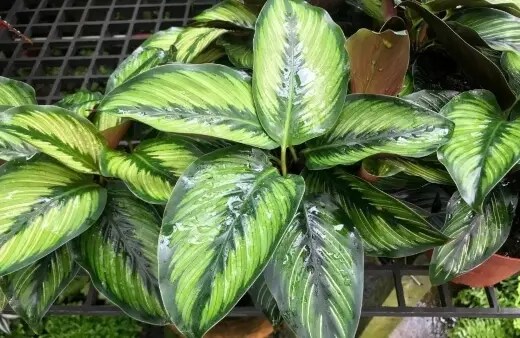 How much light does Calathea Beauty Star need?

Calathea beauty stars need bright but indirect light, so placing them either in an east or west-facing window is ideal, or slightly out of view of a south-facing window so your calathea is receiving the heat it needs without any overpowering UV.

Can you take cuttings from Calathea Beauty Star?

You can’t take cuttings from Calathea beauty star, or any other calathea or arrowroot plant – an unusual trait for rhizomatous plants, but one worth noting for any houseplant collectors. These plants can only be duplicated by division.

Is the Calathea beauty star an indoor plant?

It is possible to grow calathea beauty star outdoors but they are indoor plants in the Northern hemisphere, so should always be kept inside when temperatures drop anywhere near 40°F.

For more Calathea varieites, see our growing guides below:

Calathea beauty star has gorgeous pointed green leaves with intricate embossed white lines on their leaves, but like all Calathea there is some variations betwen individual plants, with some beauty star plants having pinkish tones to their white stripes, and others surrounding each white strip with a zesty green blotch that fades into the forest-green body of the leaf.

It’s those variations that make calathea such wonderful plants to grow because you never know exactly what you’ll get, but more importantly, they tell you when they’re unhappy as those colors fade, or change in a matter of days.

I hope our guide for how to grow Calathea beauty star helps you keep your plants looking their best, and gives you many years of joy with a healthy Calathea.

About the Author Mabel Vasquez

Mabel has enjoyed a long career as a horticulturist, working in nurseries and greenhouses for many years. Although she loves all plants, Mabel has developed a particular passion over the years for herb gardens and indoor plants. Mabel has since retired from her horticulture career and loves sharing her many years of experience with our audience here at Sumo Gardener.

Calathea Vittata | How to Grow and Care Guide

Rattlesnake Plant | How to Grow the Calathea Lancifolia