17 Most Popular House Plants
Best Cilantro Companion Plants (And What Plants to Avoid)
How to Grow Basil in a Pot? Here Are 4 Easy Tips For You to Follow!
25 Best Hanging Basket Flowers to Grow in Your Garden
Forsythias | Grow & Care Guide
Calathea White Fusion (Calathea Lietzei) Growing Guide
Monstera Thai Constellation Ultimate Growing Guide
Ashwagandha – How to Grow and Care Guide
5 Best Herbs to Grow for Improving Your Sleep Quality
8 Indoor Plants with Big Leaves for Your Home

Calathea roseopicta is an iconic species of houseplant grown all over the world for its vibrant two-tone leaves that bring warmth and excitement to any room.

For many gardeners, Calathea roseopicta will be their first foray into house plant parenthood thanks to its supposed easy-going nature, but in this article, I want to dispel the myths about Rose painted calathea being a low-maintenance, shade-tolerant plant and dig deeper into what makes this plant perform at its best. 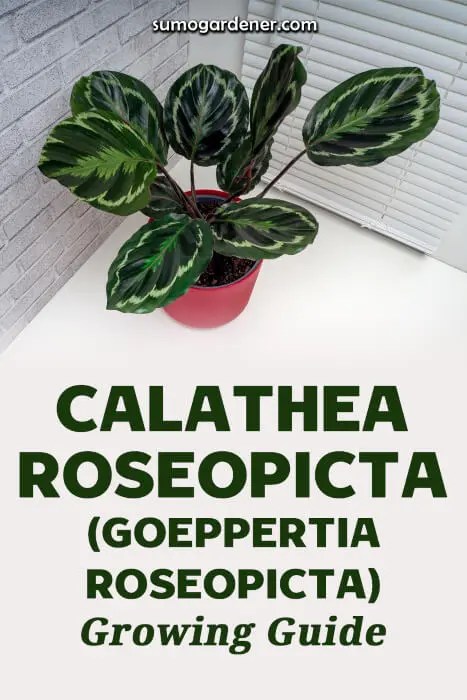 What is Calathea Roseopicta? 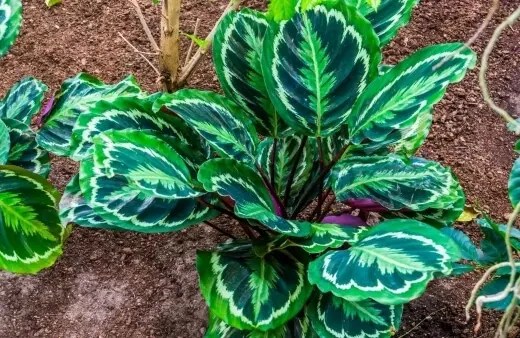 Calathea roseopicta is a wide species of houseplant in the Goeppertia genus, so is technically not a Calathea at all. Roseopicta was reclassified in the 1960s as a Calathea, then DNA evidence thanks to modern research showed it was a species of Goeppertia after all (also in the Marantaceae family or arrowroot plants).

Roseopicta is usually represented by dark green or purple leaves with a ring of crimson that fades to the outside edge of the leaf, but Goeppertia roseopicta is in fact a wide family in its own right, with dozens of sub-species including Calathea roseopicta ‘Rosy’.

Goeppertia roseopicta, or Calathea roseopicta as it was formerly known, is a species of flowering plant found in the Amazon basin in Brazil but spread widely across South America. Most Calathea can be grown outdoors in similar tropical and subtropical climates but do best indoors throughout Europe and the US.

Rose painted calathea need bright conditions but indirect light, as they would grow under the canopy of trees in the rainforest naturally, receiving high humidity, and consistently moist soil.

Note though, that rainforest floors are surprisingly dry, with trees and their epiphytes drinking the vast majority of water before it even reaches the ground. The soil under their canopy is therefore moist, but never wet.

For that reason, you should keep Calathea somewhere warm and bright, away from strong breezes, and mist them at least once a week, along with watering whenever the soil begins to dry out.

Calathea roseopicta grow from rhizomatous roots. Rhizomes are thick roots that store water and starchy carbohydrates to maintain the plant through short periods of drought and maintain their health through winter.

Thanks to their rhizomes, Calathea and Goeppertia have been grown as a reliable food source for centuries by South Americans.

Calathea Surprise Star has dark red, almost black leaves with a crisp ring of red fading outwards around the outer inch of each leaf. They are less shade-tolerant than other calathea, so should be kept in a bright room but out of direct sun.

Their thin leaves should be regularly misted in the evenings to avoid overheating them in the warm afternoon sun which can cause brown spots on the edges of leaves that are often mistaken for fungal problems.

Calathea Cora is a mystical foliage house plant with a pastel green outer rim to each leaf surrounding a checked white centre with a pink gradient. Like most calathea and Goeppertia, it’s hard to believe that nature is capable of these intricate designs.

Thanks to their paler leaves, they are slightly shade tolerant, so can be kept in awkward rooms, but do better in brighter rooms where they can respond to the setting sun by wrapping their leaves up in the evening (the most important sign of a healthy calathea).

Calathea Illustris is a fairly plain plant compared to most of its family, but its waxy leaves are more disease tolerant so they are easier to grow for beginners.

There’s a charm in their simplicity too, but they should absolutely be kept out of bright sun as their leaves are quick to show signs of sunburn and will not recover.

I love Calathea rosy with its laid back approach to colour that gives it a unique charm. The informal blood-red centres of the leaves fade to a black rim that can survive in any bright room as long as it’s not right on the windowsill.

My favourite thing about Calathea rosy is that it twitches rather than fully curls up, no matter how healthy it is. While most prayer plants are known for wrapping their leaves up in the evening, this one just slightly twitches towards the ceiling and then seems to fall asleep until morning.

Calathea medallion is possibly the most popular calathea on the planet, with a gorgeous red underside to the leaf that’s almost velvety when it’s in good health and a matt green leaf with painted white mandalas on each leaf and delicate wisps of pink within the chaos.

It’s usually Calathea medallion that people remember when they think of plant reclassification too, as it was a huge shock to collectors when it became one of the earliest plants to be reclassified to Goeppertia. 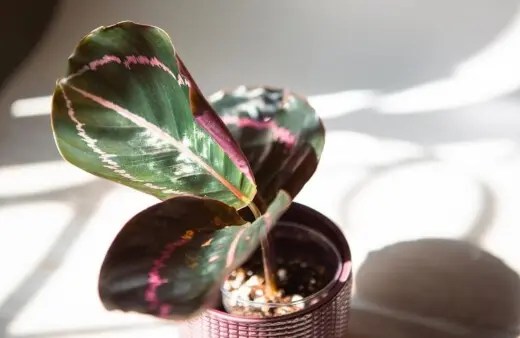 Calathea Dottie has clear pink lines across its purple-green leaves that look like they’ve been drawn on with wax crayons. Like any wide leafed calathea, Dottie is slow to close in the evenings, typically twitching upwards rather than forming the full and recognisable prayer plant shape.

One thing to be careful of when growing the beautiful Calathea Dottie is that they are overwatered more than any other Calathea. We have ours next to a Calathea Medallion, with the same watering routine, and Dottie began to get yellow leaves, while Medallion went from strength to strength, so allow the soil to dry out on the surface between watering, and mist every fortnight.

How to Grow Calathea Roseopicta

Calathea roseopicta should be grown indoors, provided it is kept well humidified, properly watered and is never in full sun. Like any rhizomatous plant it should never have its roots fully restricted but can suffer from root rot when there is too much space in the container so it’s best to grow them in pots around 1-2” wider than their root ball.

When growing this plant indoors the two biggest considerations are light and humidity, so if you have a south-facing bathroom placing it near the window but not in direct light will be ideal and the humidity of the bathroom will do most of the plant care for you.

Failing a south-facing bathroom you can place your plant near an east-facing window and mist it regularly, or in any south-facing room away from a window. Essentially, the brighter the room, the more regularly you should water a Rose painted calathea. 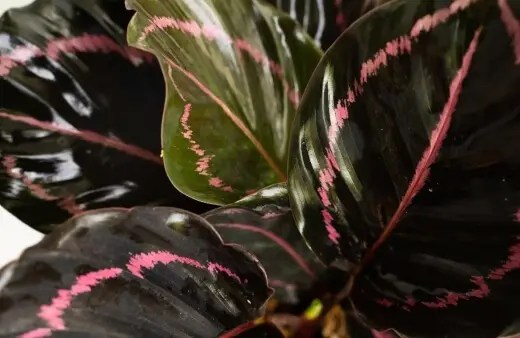 Calathea roseopicta can be pretty expensive plants to buy at full maturity, so for money conscious gardeners, the best option is self-propagation.

The best way to propagate is by division, which gives semi-mature plants immediately but if you don’t have access to existing plants it is possible to propagate Calathea roseopicta from seed.

This plant can be grown from seed, ideally in a heated propagator, but any covered tray will do the trick in a warm spot. Germination usually takes around 3-4 weeks provided the soil stays moist and the humidity is high. 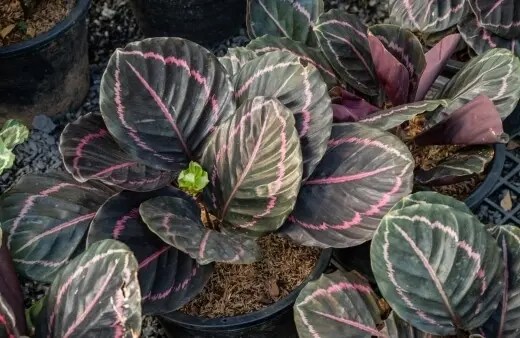 How to Propagate Calathea Roseopicta from Division

The easiest way to propagate calathea is from division. Calathea and Goeppertia grow from rhizomes, and those rhizomes duplicate beneath the soil, sending up suckers and young plants around the centre of the root ball.

For young shoots that are clearly visibly separate from the parent plant, you can take these divisions without even tipping the pot out. Simply use a sharp knife and carefully prize out the young Calathea roseopicta from the soil and put it in its own smaller pot.

For quick division and to duplicate mature Calathea roseopicta plants: 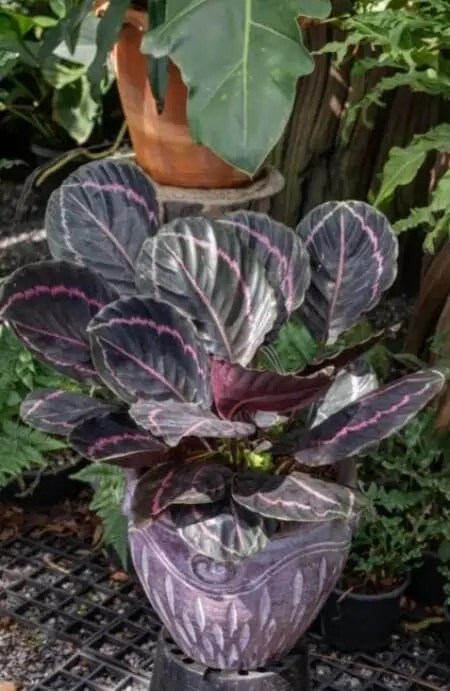 What Fertilizer to Use

Through spring and summer, Calathea can benefit from a general houseplant fertilizer as they are their best with healthy foliage, but need good root health to stimulate new foliage in summer.

Any balanced fertilizer with an NPK of 10/10/10, or similar will be fine, but another option is mulching the soil in spring with compost. Mulching is a good way to boost nutrients as well as retain moisture in the soil.

Calathea should be watered any time the surface of the soil begins to feel dry. This plant would never have dry soil in nature and can show signs of drought incredibly quickly with browning leaves, or droopy yellow leaves where the roots have been starved of moisture and nutrients.

As well as regular watering, they should be misted at least once a week in the early morning or early evening when there is no risk of sun scorching is a good way to add humidity.

Calathea doesn’t require any pruning, as their leaves grow directly from the rhizomes with no discernible stem between the root and the leaf. If leaves are ever visibly damaged or suffering from fungal or bacterial infections, they should be pruned off.

Ideally, leaving 2” of unaffected growth above the soil level to prevent rot from reaching the root. Only repot calathea when its leaves start to grow towards the edge of the container.

Calathea can suffer from root rot if there is too much excess soil around the roots as they can’t take water from soil that doesn’t contain roots. 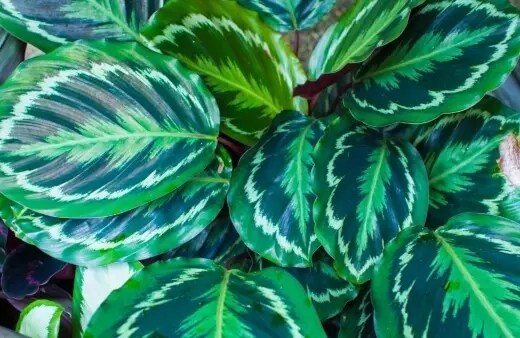 Despite being a Goeppertia, Calathea roseopicta suffer from the same pests and diseases as any other Calathea. The most common pests and diseases for Roseopicta are spider mites, mealybug, whitefly and root rot, though they suffer badly from botrytis and sun scorch in the wrong position.

Most Calathea roseopicta pests can be easily treated with neem oil. For fungal diseases, any damaged materials should be removed immediately, and the plant should be moved to a warmer position with less humidity until it recovers.

How big does Calathea roseopicta get?

This variety is an average-sized calathea, growing to around 60cm tall at full maturity after around 4 to 5 years. They are compact calathea though with an upright habit, so usually stay around 25-30cm across when they are grown in the right conditions.

Can you take cuttings from Calathea roseopicta?

Roseopicta can’t be propagated from cuttings of any type but is easy to propagate from seed or division when you have access to a healthy plant thanks to its tough rhizomatous root system.

How often should I water Calathea roseopicta?

Calathea should be well watered for most of the year, and will retain its leaves throughout winter without any significant signs of stress, so make sure to water the soil any time it begins to dry out.

You can never get enough of Calatheas so we listed the best varieties we could get our hands on:

If you’re growing a Calathea medallion or any other type of Calathea roseopicta, you know how magical they can be, not just as decoration, but as companions in your home, twitching away in the evenings, and if you have yet to discover them, I hope our ultimate guide to growing Calathea roseopicta has convinced you to go out and buy one for yourself.

About the Author Mabel Vasquez

Mabel has enjoyed a long career as a horticulturist, working in nurseries and greenhouses for many years. Although she loves all plants, Mabel has developed a particular passion over the years for herb gardens and indoor plants. Mabel has since retired from her horticulture career and loves sharing her many years of experience with our audience here at Sumo Gardener.

Calathea Vittata | How to Grow and Care Guide